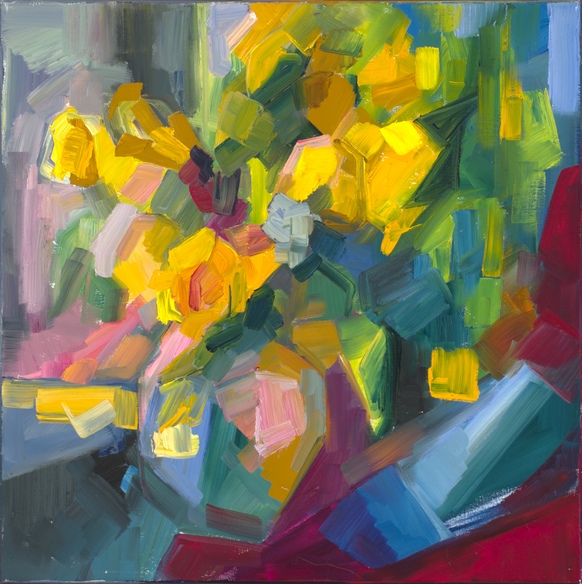 Then let not winter’s ragged hand deface
In thee thy summer, ere thou be distilled:
Make sweet some vial; treasure thou some place
With beauty’s treasure, ere it be self-killed.
That use is not forbidden usury,
Which happies those that pay the willing loan;
That’s for thyself to breed another thee,
Or ten times happier, be it ten for one;
Ten times thyself were happier than thou art,
If ten of thine ten times refigured thee:
Then what could death do, if thou shouldst depart,
Leaving thee living in posterity?
Be not self-willed, for thou art much too fair,
To be death’s conquest and make worms thine heir.

The sonnet continues the previous one, as though the second half of a single poem, re-interpreting the metaphor of distillation “back” to biological replication. Its overall rhythms and semantics are much more cheerful, focusing rather on the possible conquest of death via multiplication than in its (inevitable) victory. 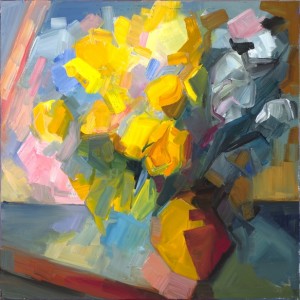 The painting, therefore, also replicates the motive of the previous one – yet replaces the flowers which have lost their colour with the exuberance of multiple green leaves against the dark cold reds in the background. The leaves are the key to this translation – the key that unlocks the sonnet’s phonetic word play in leaving thee living and stresses its link to the botanical metaphor in the previous one (continued in the opening lines).

The occurrence of “leave” in this context is a particularly complex and witty one, since one of its possible readings (the young man leaving the earth) is primed by the preceding “depart”, whereas the opposite reading (the death leaving the young man where he is) is stressed by the phonetic closeness to “living”. This paradoxical ambiguity is stressed by the syntactic ambiguity of the sentence, since “thee” in Shakespeare’s language could stand both for a simple object (“Death leaving thee”) and for a reflexive one (“Thou leaving thyself”). This observation, pivotal for my “translation”, is due to Stephen Booth’s wonderful commentary to this sonnet. He also notes another, less prominent, link to “leaves” in the sonnet, through the arithmetical language of the second quatrain (via its use to indicate the result of subtraction).

Another metaphor picked up in my translation into painting is that of vial (which should contain the young man’s summer distilled). It appears twice: directly as the glass vase (replacing a more solid and opaque one of the fifth painting) and, less straightforwardly, in the treatment of the subject matter as a whole, which suggests that the flowers depicted might have been enclosed in walls of glass (note, in particular, the large blue highlight in the lower right-hand corner, which rhymes with the shape of the vase).