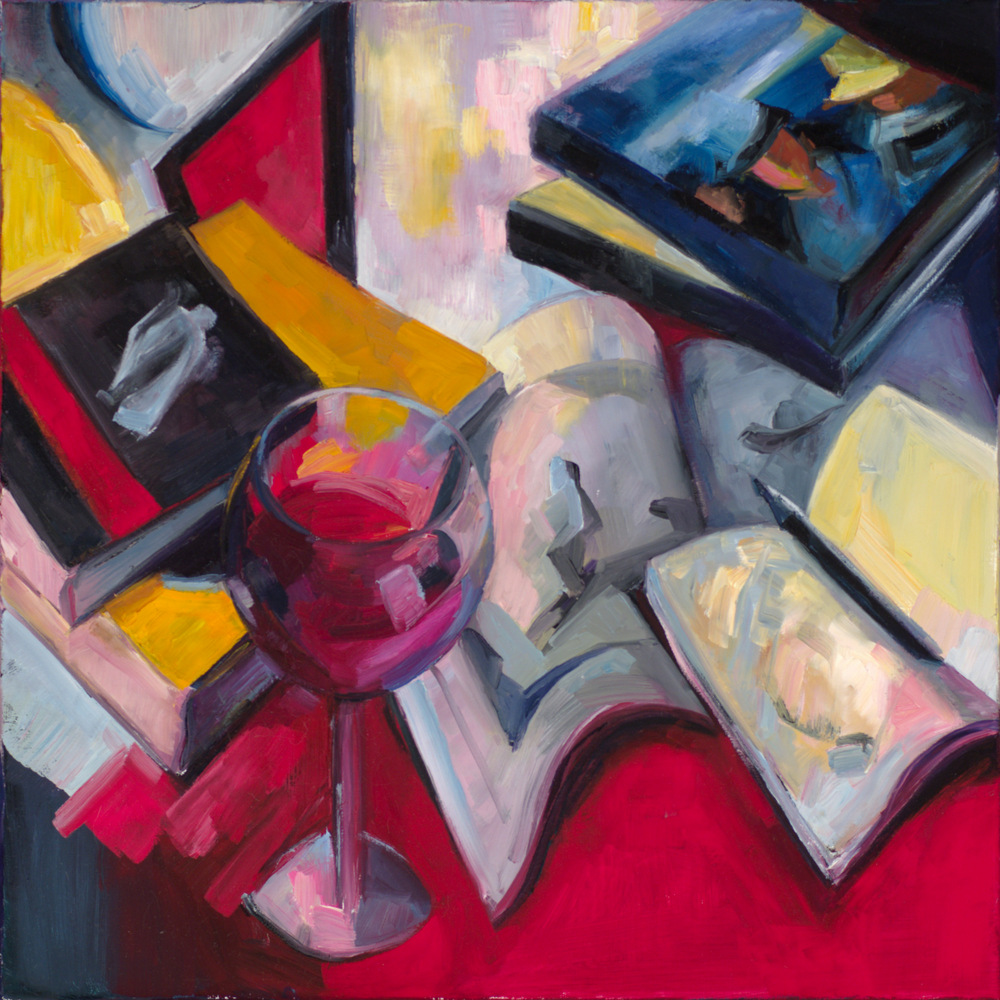 If thou survive my well-contented day,
When that churl Death my bones with dust shall cover
And shalt by fortune once more re-survey
These poor rude lines of thy deceased lover,

Compare them with the bettering of the time,
And though they be outstripped by every pen,
Reserve them for my love, not for their rhyme,
Exceeded by the height of happier men.

O! then vouchsafe me but this loving thought:
“Had my friend’s Muse grown with this growing age,
A dearer birth than this his love had brought,
To march in ranks of better equipage:

But since he died and poets better prove,
Theirs for their style I’ll read, his for his love”.

This is an interesting sonnet, worth re-reading to every person in the clutches of self-doubt: Shakespeare imagining a future after his death, where the “style” would progress so far that his poems would only be worth re-reading to his friend for their content (“love”), not for “their rhymes”. And it’s Shakespeare we are talking about, after all…

The painting combines an eclectic selection of books with an eclectic selection of styles, from near-realism, via impressionism, and towards bits of Mondrian in the background, as a commentary on “progression of styles”. All the stylistic play in the background notwithstanding, the still life still retains the suggestion of crowded, somewhat messy, writing desk of a scholar and reader, who might have paused with a glass of wine for a minute, to remember his deceased lover and his love distilled into rhymes.

The books are, from left to right:

Helen Vendler’s “The Art of Shakespeare’s Sonnets” and Dante’s Divine Comedy on top of it. An open book of Rembrandt’s drawings and my sketchbook partly covering it. Stephen Greenblatt’s “Hamlet in Purgatory” and T.J. Clark’s “The painting of modern life” with a fragment of Manet’s “Argenteuil” (1874) on its cover.

Reading this poem from the future, a future far beyond the one imagined by Shakespeare, it opens an an avenue for fascinating run of imagination: what would have happened, indeed, had Shakespeare’s Muse grown with the growing age? And yet, I just watched yesterday Ralph Fiennes’ 2011 movie version of “Coriolanus”, set up with tanks, and automatic guns, and whatnot, “in the place they call Rome”; a growing age still fully in the power of this rather extraordinary muse. 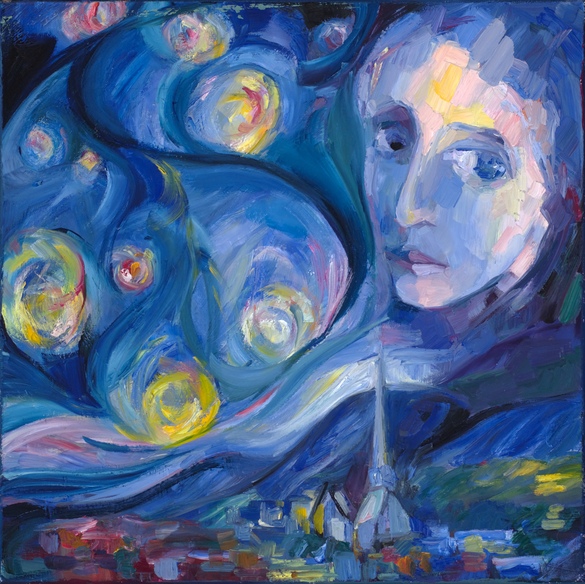 Not from the stars do I my judgment pluck;
And yet methinks I have astronomy,
But not to tell of good or evil luck,
Of plagues, of dearths, or seasons’ quality;

Nor can I fortune to brief minutes tell,
Pointing to each his thunder, rain and wind,
Or say with princes if it shall go well,
By oft predict that I in heaven find:

But from thine eyes my knowledge I derive,
And, constant stars, in them I read such art
As truth and beauty shall together thrive,
If from thyself to store thou wouldst convert;

Or else of thee this I prognosticate:
Thy end is truth’s and beauty’s doom and date.

Click here to listen to David Calder reading this sonnet in the Touchpress edition.

When I began composing this painting in my mind, I thought it would be some sort of comic relief from the previous, rather painful, one. After all, a large chunk of the sonnet is filled with mocking astrology (“astronomy” in Shakespeare’s language), listing common types of its mundane predictions and using markedly convoluted grammar to convey its pompous language.

(As an aside, a modern reader might be tempted to assume that the preposterous “oft predict” in line 8, where both words seem to have lost their part-of-speech affiliation in an attempt to sound more important, is just one more difference between Shakespeare’s English and modern English. This doesn’t seem to be the case: this phrase must have sounded as strange to contemporary readers as it does to us.)

Yet I could not quite find my way into the painting from the “mocking astrology” angle; the essence of the sonnet’s meaning lies elsewhere: another human being, “thou”, as the largest thing in the universe, brighter than the stars, the source of real knowledge.

I used Van Gogh’s Starry Night as a starting pointing for the painting. On the one hand, the original is one of the most powerful visual statements of insignificance of our little, negligible human affairs (reduced to the bottom of the painting) – in comparison to the ever-present influence of the stars above. On the other hand, the reproductions of this image are so ridiculously overused nowadays – it seems to be everywhere, from postcards to jigsaw puzzles to place mats and coffee cups – that its use in the context of our culture seems to match Shakespeare’s mock of popular mythology of his. My painting, therefore, tries to invoke both the original and its endless reproductions.

The second image referenced in the painting is less universally known; it’s Mikhail Vrubel’s Swan Princess (1900). At this time, Vrubel was working on the set and costumes for a production of Rimsky-Korsakov’s opera, “The tale of Saltan the Tzar”; the Swan Princess was played by Vrubel’s wife, Nadezhda Zabela-Vrubel (the opera itself is based on a tale-poem by Alexander Pushkin). It might not be clear from this image (please click it to see a larger one), but the Swan Princess has a star shining from her forehead, which is, I believe, what “attracted” her into my painting.

The semantic contrast between unimportant things astrologists claim to predict and the answers to the essential, eternal questions to be found in the beloved’s eyes is formally enacted in the sonnet via the opposition of rhythms in the first eight lines and in the last six. Just pronounce to yourself and compare two “parallel” opening lines, line 1 and line 9:

Not from the stars do I judgement pluck…

But from thine eyes my knowledge I derive…

Feel how the scurrying rhythm of the first line is replaced by a slower and more powerful movement of the second one? This is the contrast I’ve tried to “recreate” in the painting, in the opposition between its “starry” part and the “swan princess” part. And both the chaotic movement of heavenly stars and the vertical spire of the church below ultimately lead the viewer to the constant stars that are human eyes.

And yet, in the end, it did turn out to be a whimsical and mocking painting, yet not quite as I imagined it at first.

When forty winters shall besiege thy brow,
And dig deep trenches in thy beauty’s field,
Thy youth’s proud livery, so gazed on now,
Will be a tatter’d weed, of small worth held:
Then being ask’d where all thy beauty lies,
Where all the treasure of thy lusty days,
To say, within thine own deep-sunken eyes,
Were an all-eating shame and thriftless praise.
How much more praise deserved thy beauty’s use,
If thou couldst answer ‘This fair child of mine
Shall sum my count and make my old excuse,’
Proving his beauty by succession thine!
This were to be new made when thou art old,
And see thy blood warm when thou feel’st it cold. 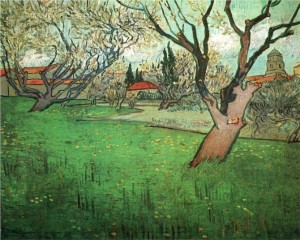 The motive for this landscape was loosely inspired by Vincent Van Gogh’s “View of Arles with Trees in Blossom” (1988), with an older bare tree in the foreground set against a blooming background. In the sonnet, the future winter (or even forty of them) is juxtaposed to a possible future spring/youth (in the person of the addressee’s possible child), yet both are contrasted to the implied present (when the addressee himself is young and blooming). Van Gogh’s motive provided the needed contrast between the old and the new, and the potential for ambiguity between the winter and the spring.

The central image of the poem integrated into the landscape is the deep trenches in thy beauty’s field, which separates the wintery, “old age” foreground from the youthful, springtime background, but also defines the overall inevitable movement from the foreground to the distant background – yet the field is painted in such a way, texture-wise, as to defy the implied perspective and allow for optical ambiguity between the “spring” background being faraway or on the same plane as the old tree. At the same time, the branches of the old tree strive to establish a link between the two.

The core of this attempt at a translation, however, lies in colour, playing at the possibility of seeing something “warm” while feeling it “cold” (in the couplet of the poem): the dominant colours are cold but they are used to set off the vibration between colder and warmer hues. Although the warm colours can be seen, they do not change the feel of coldness.