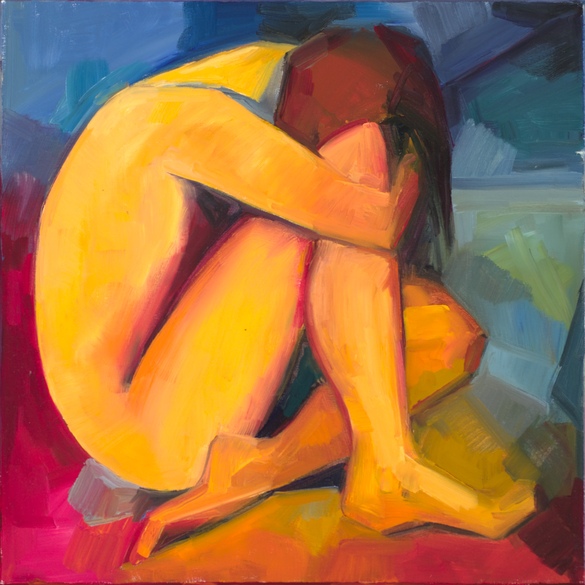 Unthrifty loveliness, why dost thou spend
Upon thyself thy beauty’s legacy?
Nature’s bequest gives nothing but doth lend,
And being frank she lends to those are free.
Then, beauteous niggard, why dost thou abuse
The bounteous largess given thee to give?
Profitless usurer, why dost thou use
So great a sum of sums, yet canst not live?
For having traffic with thyself alone,
Thou of thyself thy sweet self dost deceive.
Then how, when nature calls thee to be gone,
What acceptable audit canst thou leave?
Thy unused beauty must be tomb’d with thee,
Which, used, lives th’ executor to be.

One interesting thing about this project is how the process of translating a poem into a painting varies from sonnet to sonnet. This one wouldn’t not let me alone for several sleepless hours of night before the image emerged with nearly complete clarity; next day, I had just to transfer it to the canvas.

Although the sonnet is obviously meant to continue the theme of procreation, its semantics suggests the possibility of a broader interpretation: the uselessness and ultimate deadliness of not giving in general, not returning to the world (“Nature”) what was “lent” to one to give further. So the image is a figure curled into itself — somewhat ambiguous between “having traffic with thyself alone” and a posture of deep despair which comes from being disconnected from the world.

On the pictorial level, I also tried to make the figure ambiguous between being three-dimensional, “realistically” integrated into its environment, and disconnected from it: so, for example, in some places the edges are treated softly, as though the figure is part of the outside world – whereas some other edges are decoratively hard, suggesting that the figure is “cut out” and flat, as though it doesn’t belong to the landscape at all. Similarly, although the colour treatment of the figure more or less keeps with realistic flesh tones, it is considerably “poorer” in colour compared to the wild dance of the colour wheel around it, in which it doesn’t take any part.