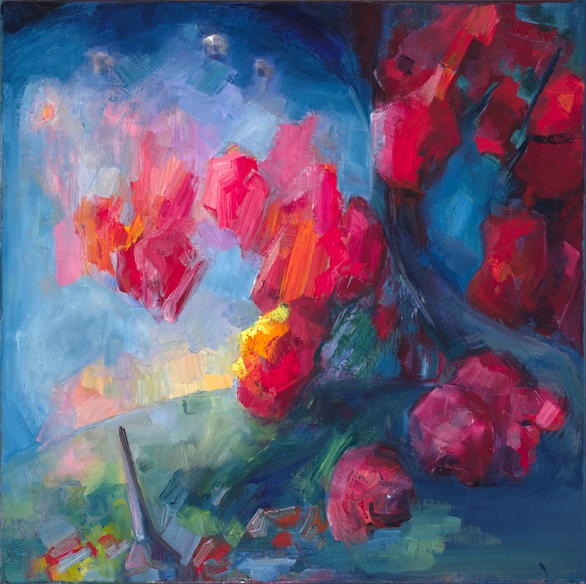 When I consider every thing that grows
Holds in perfection but a little moment,
That this huge stage presenteth nought but shows
Whereon the stars in secret influence comment;

When I perceive that men as plants increase,
Cheered and check’d even by the self-same sky,
Vaunt in their youthful sap, at height decrease,
And wear their brave state out of memory;

Then the conceit of this inconstant stay
Sets you most rich in youth before my sight,
Where wasteful Time debateth with Decay,
To change your day of youth to sullied night;

And all in war with Time for love of you,
As he takes from you, I engraft you new.

Click here to listen to Fiona Shaw reading this sonnet. 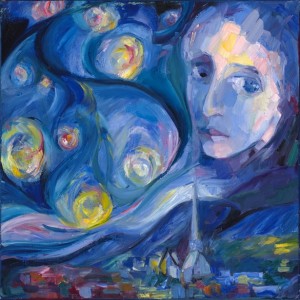 Something strange happened here. As I was finding my way into Sonnet 14 (“Not from the stars do I my judgement pluck”), trying and rejecting various visual approaches to “mocking astrology”, the image that gradually clarified itself before my sight grew semantically closer and closer to this sonnet, with a beautiful human face engrafted against a cosmic view of stars and earth. I like to see it as a sign that I have really connected to the visual counterpart of sonnets’ deep underlying current of thoughts and feelings.

For this painting, then, I felt that I have to acknowledge the link between the two sonnets/images, to integrate it into the new image – and yet to shift the focus from the dominating presence of another human being, “you”, for a human observer towards the fragility, the acutely perceived inconstancy of our stay in this world.

In this sonnet, the speaker doesn’t mock an astrologer’s cosmic view of human affairs; he takes an even more cosmic view – from which he can observe both the stage on which the show of human affairs is presented, and the stars commenting on the show, and the debate going on between the global forces of Time and Decay. A mere human can directly witness this debate, this painful inconstancy of beauty, only if he looks at something with a life span much shorter than his – which, I believe, leads to Shakespeare’s mention of plants in the sonnet.

So these are two views my painting juxtaposes to convey the conceit of this inconstant stay: the cosmic view, mostly borrowed from the previous painting (and thus, indirectly, from Van Gogh) and the close-up of red roses. I have changed the landscape part of the painting, losing the stability of horizontals and verticals (intrinsic to the “human” view of a landscape) and adding a hint of a theatrical curtain to indicate its show-like quality for the cosmic observer. The roses, too, nearly dissolve into brushstrokes and color shapes – rather a momentary visual impression than a solid, stable “object”.